walla walla artist on the loose

Saturday, sunny, balloons floating over the house in the early morning, making the dogs crazy – apparently afraid of some alien invasion happening in their world. 2nd day of Balloon Stampede and lots of balloons were able to fly. Morrie really is frightened by the “whooshing noise” – but tolerates as long as he is held. Mac is pretty “whatever” to the whole scene. Similar reactions to fireworks.
We left the house about 9 and went to the farmer’s market. WOW! what a difference a year makes…so many new vendors! Lots of stuff! Met my friend Sandy Lizut and we talked art, education, print making and book making over a WW Sweet Onion sausage dog. Nice to connect. Visited with my friend and vendor Antoinette and picked up some of her really good hummus, berries and breads.
Now it’s back to the basement and the rest of the clearing of the desks,etc in preparation of the yard sale next weeekend. And it is my full attempt to get a little painting in on this fine weekend. I really wanted to just spend a bunch of time visiting garden centers and focus on new plants and landscaping….but the yard sale HAS to happen!
I just looked at an artist’s site and blog from NE Oregon…Katherine Treffinger…really nice things…I am going to add her blog site t0 my list…

I promised images of the miniatures…each is less than 4×6 inches. I painted these on the Wallis paper which is the really toothy pastel paper…my favorite, because it will hold a ton of pigment! Not only that, but it is a good rigid surface without working on a board. Great for blending.
I am working on pieces for the Joseph show…not a thing to show yet…Looking forward to the journey there anf 4 day stay. We stay at a guest house out in the county. It’s a house/barn divided by a laundry room and tack room. It is a wonderful little 1 bedroom accommodation and the owners welcome Mac and Morrie.
Les and I are working diligently on a yard sale. Wow! Another good weekend of prep and we should be ready for the sale the weekend of the 16th!
I am getting the yen to do some jewelry. I am loving all the great southwest chunky turquoise and silver pieces I am seeing and I have some starter material….hmmm.

Wow, the weekend came and went in a hurry. I didn’t use much of my creative skills today unless getting things orgnzied for a yard sale fit that bill! The good thing is I have been spending time in my studio going thru a lot of stuff and accumulation. I had yet to go t hru my Mom’s stuff that I have had sitting in boxes for the past 3 years.
I found some really great penand ink renditions by Ben Burnett. They were mostly Christmas cards that my Mom had saved, but also some from his monthly cartoon in a magazine. He did these really interesting cartoonish drawings – always animals, usually horses and cattle and there was always some wry humor associated. I have not decided what to do with them…whether to put them in a scrap book format or what. Something collectable for a former MT kid. His drawings I think, are his alter ego when there is a guy on a horse in them…I see a resemblance to Ben anyway, in the drawings!
I did not take anything to the show in Pendleton for the month of May. There was a little overlap with the Joseph show, so just decided to focus on Joseph and not get in a dither and have to ask someone to pick stuff up at Pendleton when I’m in Joseph, etc.
Think I will take CheatGrass Hills to the Joseph show…don’t know what else.
Spent last evening and dinner with Jeff and Judy Schlicher. Jeff brewed up some really god Manhattens along with his pasta carbonera and spinach salad. We cheated and picked up dessert at La Patisserie. Effortless, but worthwhile!
Richeson Co has started manufacturing new pastels…They are reputed to soft and compared to Unison. Dakota Arts is offering them with a special price, so may have to give them a test drive!
Make it a great week…I will post the last 4 miniatures early inthe week.

state of the art in Walla Walla 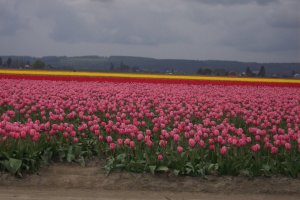 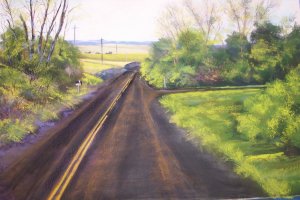 I have been neglectful in my blog – but I have my excuses :-)!
A week ago the showdogs Mac and Morrie and I drove to Bellingham, met the bf – aka Les there. He had been in Blaine for the week at the Spring Conference for WA Realtors. I drove up so we could attend the Blue Horse Gallery opening for the Northwest Pastel Society show. My two pieces looked fine and dandy amongst 125 really good paintings. Interested parties can go to http://www.nwps.org/ and see some of the pieces. It was a great gallery space. The weather was wonderful and we were in the Skagit valley in time to see the tulips in bloom. What a sight to see acres of color! We really viewed the fields on the fly…it is pretty congested with visitors and we just wanted to get out and be in the green and sort of sunny NW! Drove Whidbey Island on the way back to Seattle.
I hung new work at Whitman Cellars last week – Fields of Green…8 pieces there in their tasting room…Also got a call from Ceil Blaine who now is managing the 1928 gift shop at the Marcus Whitman Hotel. She asked if I would bring work there in July and I agreed. Did take her some note cards and two smaller paintings to introduce “Upcoming shows”. As one might guess, if you know Ceil…she has her expert twist on this little space with really wonderful items. And she has an espresso set up and makes superb coffees! It’s a must stop for WW visits and outings. And you can wander thru the beautiful restored hotel lobbies as well!
It’s Spring Release for the wine industry…Oh,and it is raining hard today…was hoping it would be sunny and warm…But there is some fun in walking in the rain in and out of tasting rooms, having a great time with friends. Kate and I will maybe go out tomorrow for a little while and see how we fare!
I finished some miniature paintings this past week. I have not decided if they will go into 4×6 frames unmatted or 8×10 matted. image size is about 4×6. Also finished another image of Scenic Loop.
My focus now is the show in Joseph 5-7 June and working on a commissioned piece.
One more thing…I am working with the social worker for the local cancer center to offer art classes to people who are patients and want to learn or work on a particular medium. M’Lisse Moerk, Laurie Borer, CarlyRae Hiphauf have expressed interest in doing some classes. I think it will be a rewarding endeavor and look forward to getting it off the ground – providing an outlet for people experiencing a difficult time in their lives.